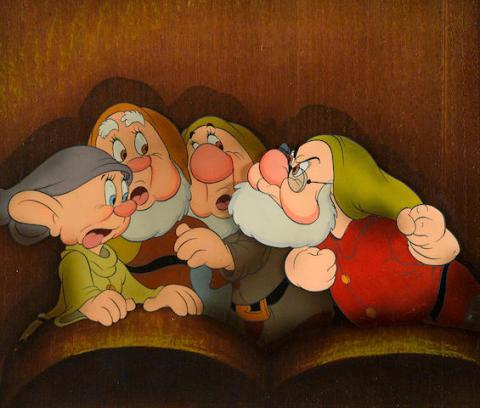 This is a wonderful original production cel from the Walt Disney Studios animated feature, Snow White and the Seven Dwarfs (1937). This hand-painted cel features a comical image of Dopey, Happy, Sneezy, and a frustrated Doc looking over the foot of their beds which captures the characters' personality and comic genius of their interactions. This hand-painted cel was created at the studio and used during production, representing an actual frame of animation that was photographed and appears in the film. This cel is in great condition and has been trimmed and applied to a custom wood veneer background as it was originally prepared by the studio for the Courvoisier Galleries. The piece measures 20" x 20 images framed and the above imagery measures 7.5" x 9.25" through the mat opening.