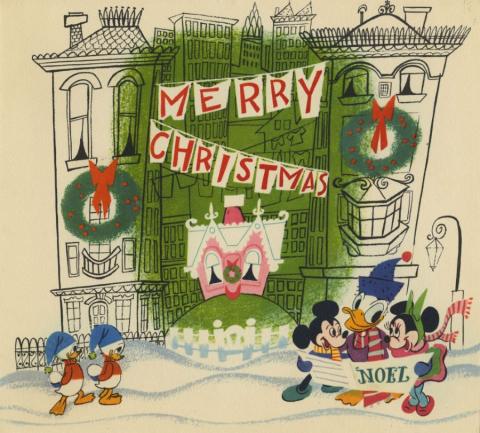 A Christmas Card created by the Walt Disney Studios in 1951. The cover features imagery of Mickey, Minnie, Donald, and Donald's nephews caroling in front of the Little House. The inside of the card opens to reveal many classic Disney characters riding inside a train with the upcoming year's calendar displayed on the train cars. The back of the card is an advertisement for the then upcoming Disney Studios animate film Peter Pan and live action film Robin Hood. The studio would use their in house talent to design a new holiday card every year that would highlight the then favorite characters and films while also promoting the upcoming projects that were in the works. Measuring 7"x15.5" when opened, the card is In fine condition and comes with original unused mailing envelope.