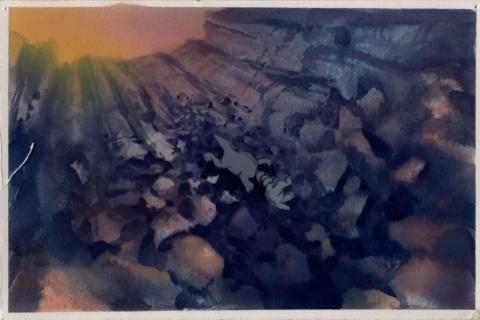 An original background color key concept painting from the Don Bluth Studios production of The Land Before Time (1988). Featuring Littlefoot and Cera falling down a cliff side while playing, the hand-painted concept was created at the studio and used during the early production of the film. The concept was used to develop and finalize the color palette, the layout of the action, and the overall feel of the scene. When a color concept is finalized during production, it becomes the reference tool that animators would use to paint cels and backgrounds, as well as to further progress through the storyboarding and layout of the individual scenes. Measuring 4.5"x7" overall, with an image size of 4.25"x6.75", the concept is in fine condition with minimal edge wear and pinholes in the top two corners from studio use.