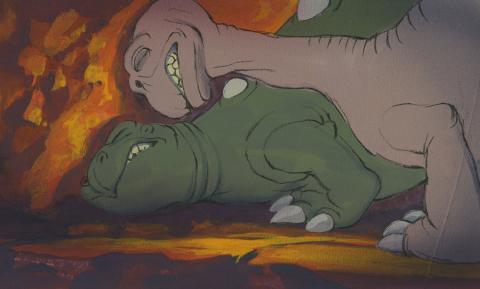 This is an original background color key concept painting from the Don Bluth Studios production of The Land Before Time (1988). This hand-painted concept image features Littlefoot and Spike working together to push a boulder off of a cliff during the Tyrannosaurus Rex battle, and was created at the studio and used during the early production of the film. This concept was used to develop and finalize the color palette for the scene, the layout of the action, and the overall feel of the scene. When a color concept is finalized during production, it becomes the reference tool that animators would use to paint cels and backgrounds, as well as to further progress through the storyboarding and layout of the individual scenes. The concept is in great condition and the overall measurements of the piece are 4.5" x 15.75", and the image takes up almost the entirety of the piece.