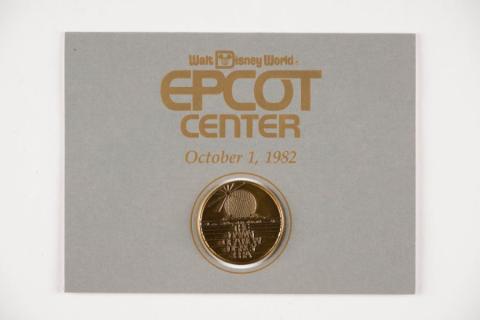 A commemorative metal medallion that was produced for the 1982 grand opening of EPCOT Center at Walt Disney World. Featuring "The Dawn of a New Disney Era" in text in front of Spaceship Earth on one side, the medallion was distributed to cast members at the park. The reverse is not seen as it is attached to the card, but features the EPCOT logo with the globe at the center of five interlocking rings. Both sides are very well detailed with three dimensional relief imagery. Measuring 1.5" in diameter on the 5"x7" card, the medallion is in excellent condition.