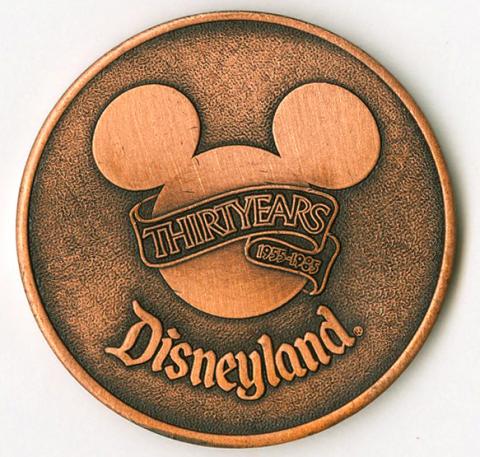 This is a commemorative metal medallion that was produced in 1985 to celebrate the 30th Anniversary of the Park. These coins were used on invitations to a special 30th Anniversary Open House. The coin measures 1.5" x 1.5" x .125" and is in excellent condition, appearing to be unused from the invitation campaign. One side reads "Thirty Years 1955-1985 Disneyland" over the iconic Mickey head logo and the reverse features the Walt Disney quote, "The way I see it, Disneyland will never be finished. It's something we can keep developing and adding to...I've always wanted to work on something alive., something that keeps growing." Both sides are very well detailed with three dimensional relief imagery.