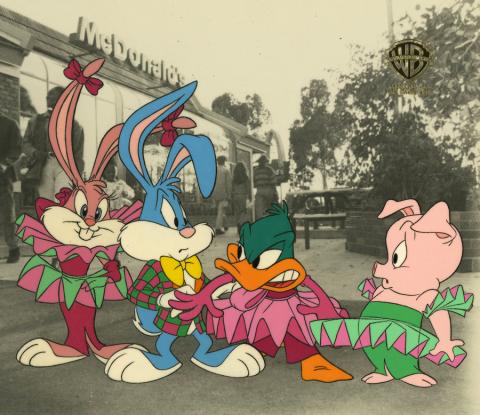 An original production cel from the Warner Bros. Studios featuring characters from the animated series Tiny Toon Adventures (1990-1994). The image depicts Buster Bunny, Babs Bunny, Plucky Duck, and Hampton J. Pig, and the production cel was created at the studio and used during the animation of a 1990/91 McDonalds Commercial. The piece represents an actual frame of animation that was photographed and appears in the the advertisement, and it is paired with a color copy reproduction background. Measuring 10.5"x12.5" overall, and with a character image measuring 6.75"x9.25", the production cel is in very good condition. The artwork comes from the official WB Studio art program, and a studio COA will be provided.