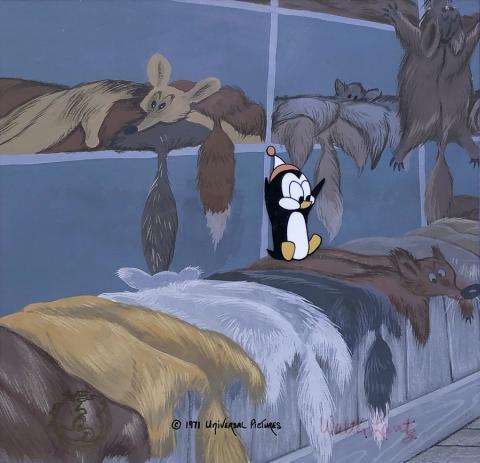 An original production cel and background setup from a 1970s Walter Lantz Studios animated Chilly Willy cartoon. Featuring Chilly Willy, the hand-painted cel was created at the studio and used during the animation process. The cel was paired with a hand-painted production background, likely by the studio, that may or may not be from a Chilly Willy short. Each layer is an actual frame of animation that was photographed and appears in a Lantz cartoon. The cel has also been hand-signed by Walter Lantz, but the ink has experienced notable fading. Measuring 16.5"x16.5" framed with the mat opening measuaring 8.5"x8.5" and the character image measuring 2"x1", the setup is in fine condition, unexamined out of frame.