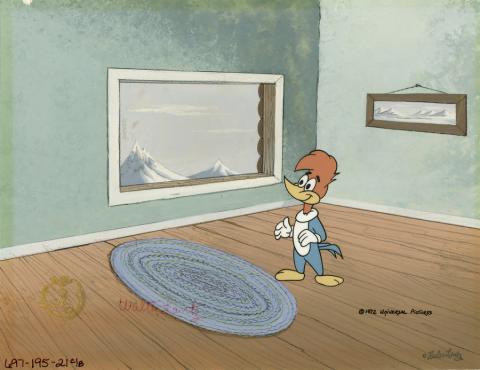 An original production cel from the Walter Lantz Studios animated Woody Woodpecker short (1940-present). Featuring Woody Woodpecker, the hand-painted cel was created at the studio and used during the animation process. The piece is an actual frame of animation that was photographed and appears in the cartoon, and it has been paired with a production background from another Walter Lantz production. Measuring 9.5"x12" overall and with the character image measuring 3.5"x2.5", the setup is in very good condition with edge wear on top edge, and discoloration throughout from age, including the color of Woody himself. The cel has also been signed by Walter Lantz, although the signature has faded to a light red due to age.