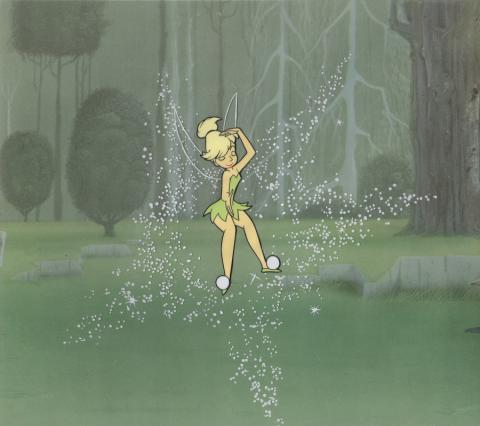 An original production cel from the Walt Disney studios 1950s television series Walt Disney's Disneyland. Featuring a wonderfully large image of Tinker Bell, the hand-painted cel was created at the studio and appears to be from the episode with Walt Disney talking to Tink. The piece is an actual frame of animation that was photographed and appears in an episode. Measuring 10"x12" overall with the character image measuring 8.5"x8.5" including her pixie dust, the cel is in fine condition as it was originally prepared for sale at the Disneyland Art Corner. The cel is slightly trimmed, is paired with a color copy reproduction background, and has its Art Corner backing with the gold seal.