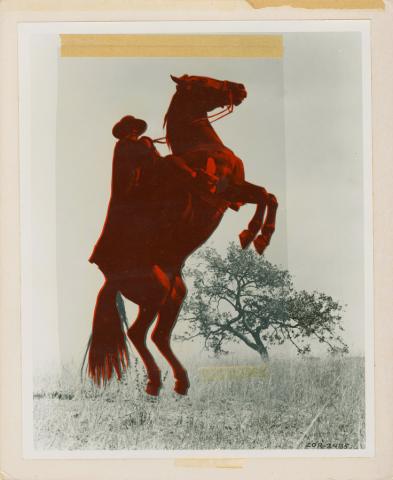 This is an original 1950s Zorro publicity photograph. This photo features an image that measures 9.5" x 7.5' with Zorro riding his horse, Tornado. There is a clear cel layer over the photograph that has a red masking layer that covers the majority of the image of Zorro and Tornado. It is likely that this publicity photo was being cleaned up with the masking layer so that it could be used in other poster art or marketing imagery during the late 1950s, when Zorro was a regular performer at Disneyland. This image was also reused in the 1970s when Disney released the Zorro package film, The Mask of Zorro. The photo is in very good condition with minimal wear from use and age.