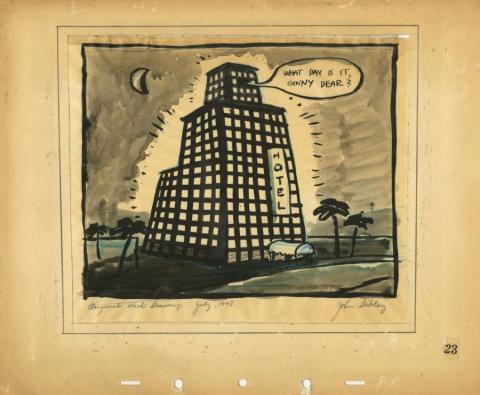 An original animator's gag gift drawing. Featuring an image of a large hotel with text coming out of the top window which reads
"what day is it Ginny Dear?" The drawing was created as a gift to Milt Banta in commemoration of his wedding in 1943. Milt joined Disney Studio in the early 1940s as an assistant animator before becoming a writer. He is credited on several shorts as well as Alice In Wonderland, Peter Pan, and Sleeping Beauty, as well as several Golden Books in the early 1950s. The illustration was created and signed by John Sibley, as a gift for his colleague. Measuring 12.5"x15.25" overall, with the character image measuring 8"x10", the drawing is in very good condition with light edge wear due to age, and peg hole damage