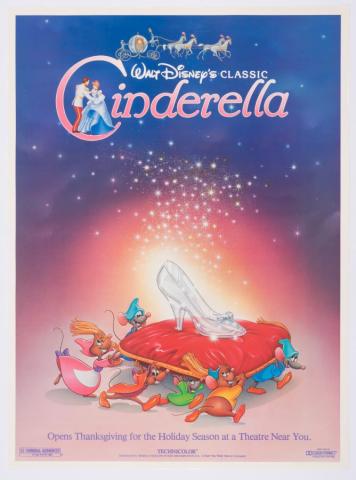 A Cinderella re-release poster. Featuring a vibrant illustration of Cinderella's mice friends carrying her missing glass slipper on an elegant red silk pillow, the poster was produced to promote the theatrical re-release of the classic animated feature. The Walt Disney Studios animated feature was released originally in 1950, and re-released many times in 1957, 1965, 1973, 1981 and 1987. This poster was most likely used for the promotion of the 1981 or 1987 release. Measuring 27"x20" with an image size of 26"x19", the poster is in very good condition with some edge wear in the margins.