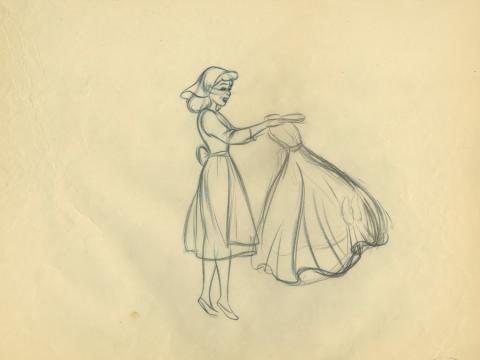 This is an original production drawing from the Walt Disney Studios production of Cinderella (1950). This drawing features Cinderella holding her new ball gown, custom tailored by her mice and bird friends, and was created at the studio and used during the production of the film. The overall measurements of the piece are 12.5" x 15.5" and the image itself measures 7.75" x 6.25". This scene was supervised by Disney Legend, and one of the studio's Nine Old Men, Eric Larson. The under-drawing, accomplished in blue and red pencil, was done by Larson himself. The drawing is in excellent condition.