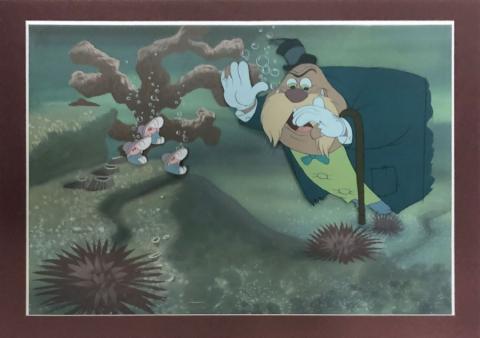 An original production cel and background setup from the Walt Disney Studios animated feature Alice in Wonderland (1951). Featuring a deviously wonderful of the Walrus manipulating the baby oysters from the Walrus and the Carpenter segment of the film, the hand-painted cel was created at the studio and used in the animation process. The cel is paired with a hand-painted background from the film that appears mere seconds after the cel appears in the film. Both pieces were photographed during production and appear in the final film. Measuring 18.75"x21.5" framed with the character image measuring 5"x8", the setup is in very good condition with minor rippling to the cel from age. The cel is unexamined outside of its frame.