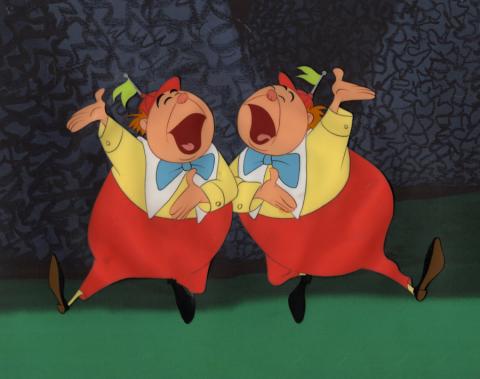 An original production cel from the Walt Disney Studios animated film Alice in Wonderland (1951). Featuring Tweedle Dee & Tweedle Dum, the production cel was created at the studio and used during the animation process. The piece is an actual frame of animation that was photographed and appears in the movie as a fade in shot after the story of the Walrus and the Carpenter ends. Measuring 7.5"x9.25" overall, and with the image area measuring 4.75"x7.5", the production cel is in good condition with some paint wear in one of the feet which is painted on the surface. The cel is paired with a color copy reproduction background. The last image shown is a screen capture of the scene this cel was used to create and is shown for reference only, it is not a physical print included with the cel.