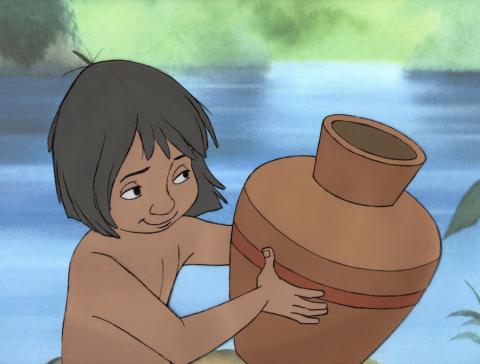 An original production cel from the Walt Disney Studios animated film The Jungle Book (1967). Featuring Mowgli holding Shanti's jug of water, the cel was created at the studio and used during the animation process. The piece is an actual frame of animation that was photographed and appears in the cartoon. Measuring 10"x12" matted with a 6"x8" opening, and with the character measuring 5.5"x6", the cel is in fine condition with staple holes at the top center of the two trimmed cels. The cel was originally prepared by the studio for sale at the Disneyland Art Corner and retains its original mat with the Art Corner gold sticker, and we have paired the cel with a color copy reproduction background.