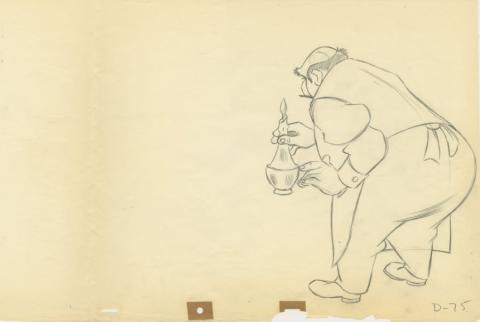 An original production drawing from the Walt Disney Studios animated film Lady and the Tramp (1955). Featuring an image of Tony placing a candle on the table during the Bella Notte sequence of the film, the drawing was created at the studio and used during production. The image was created by Disney Legend, and one of the Nine Old Men, John Lounsbery. Measuring 12.5"x15.5" overall, with the image area measuring 8"x9.75", the drawing is in good condition with edge wear and tearing along the bottom edge.