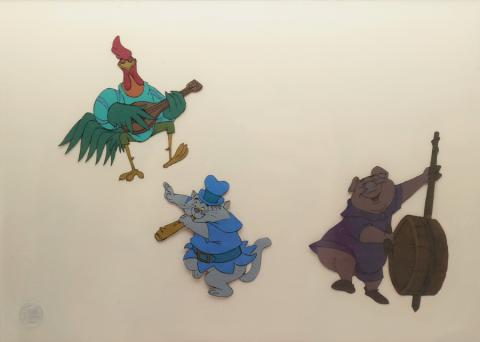 This is an original production cel from the Walt Disney Studios production of Robin Hood (1973). This hand-painted cel features Alan-A-Dale playing music with his pig and cat band members as everyone celebrates Robin and Maid Marian, and was created at the studio and used during the production of the film, representing an actual frame of animation that was photographed and appears in the film. The overall measurements of the piece are 15.25" x 19.25" and the image itself measures 9" x 11.5", with matte opening 10" x 14". The cel is in very good condition, unexamined out of frame. The frame is included complimentary, it may have some signs of wear including scratches and dents. Please ask for condition notes on specific frames if it is a concern.