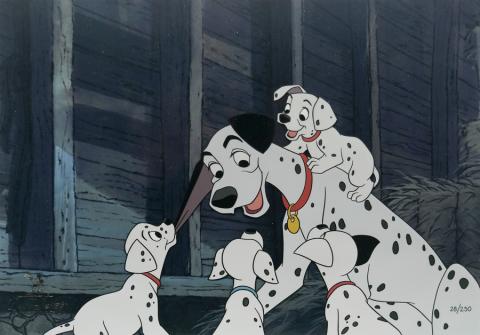 A hand-painted limited edition cel titled "Spotted in the Barn" (2008), inspired by the Walt Disney Studios 1961 animated film 101 Dalmatians. Featuring a loveable image with Pongo and his puppies from just after the Twilight Bark, the limited edition was recreated from original artwork from the film. The edition of only 250 pieces was created in 2008 and is accompanied by its original studio certificate of authenticity. Measuring 12.5"x17" overall and with a character image measuring 8"x13.75", the limited edition is in very good condition and includes the original studio certificate of authenticity.