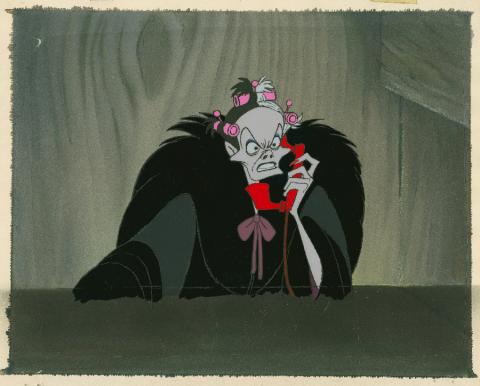 This is an original production cel and background setup from the Walt Disney Studios. This hand-painted cel features Cruella De Vil as she prepares herself to impress. It was created at the studio and used during production, representing an actual frame of animation that was photographed and appears in the production 101 Dalmatians (1961). The cel is paired with a hand-painted production background that was used in the production of the Walt Disney Studios produced health education film The Winged Scourge (1943). The overall measurements of the setup are 10.25" x 12" and the image itself measures 9" x 11.25" on the background and 5.5" x 7" for Cruella. The setup is in good condition with tears in the margins of background and an uneven trimming to Cruella's cel.