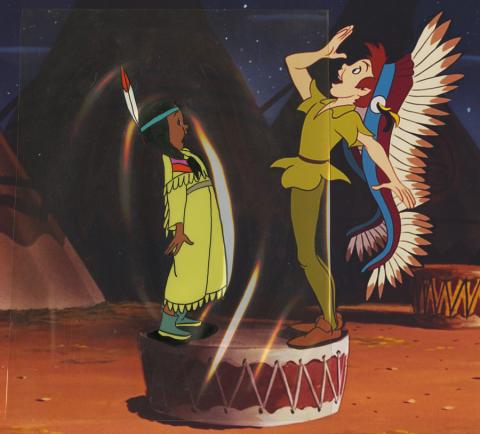 This is an original inker's test cel from the Walt Disney Studios production of Peter Pan (1953). This hand-painted cel features a wonderful image of Tiger Lily standing in surprise as she looks at Peter Pan dancing on top of the drum with her, and was created at the studio by an inker practicing the inking and painting for the character in the scene. The overall measurements of the trimmed animation cel are 7.5" x 6" and the image itself measures 5.25" x 2". The cel is in good condition with some yellowing to the cel itself. The cel is paired with a color printed reproduction background which has an image of Peter in the copy background, he is not part of the painted image on the cel. The last image shown in the listing is a screengrab from the scene in the film that this cel was used to create, it is shown for reference and is not a physical print included with the cel.