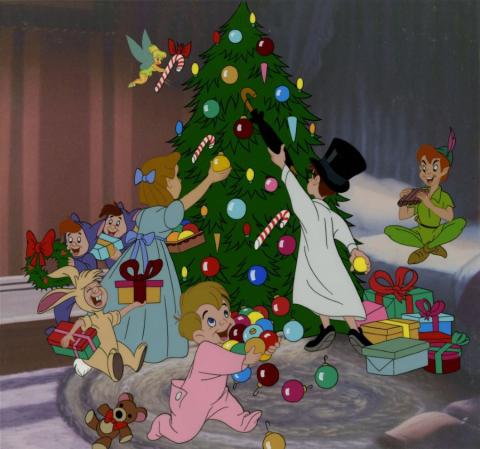 A unique hand-painted cel inspired by the Walt Disney Studios animated film Peter Pan. Featuring a festive Christmas tree as it's decorated by Peter Pan, Tinker Bell, the Lost Boys, and the Darling children, the hand-painted cel was created at the studio in the development of a studio promotional image in the 1970s or 1980s. Similar imagery has been attributed to production at the studio during the time of the film, but this piece is believed to be slightly more modern. Measuring 12"x12" overall and with the character image measuring 11"x10.75", the cel is in very good condition with rough trimmed edges, and it is paired with a color printed reproduction background.