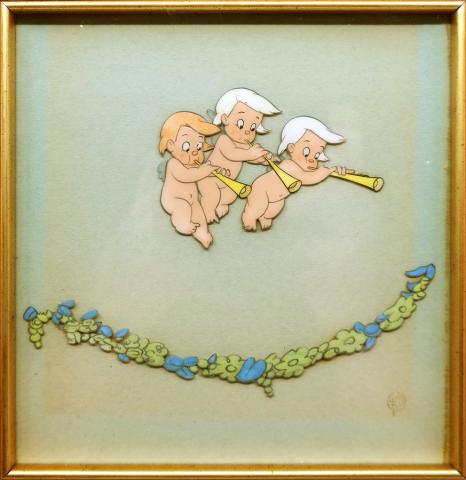 This is an original production cel from the Walt Disney Studios production Fantasia (1940). This hand-painted cel features the three Cherubs playing music from the Pastoral Symphony. It was created at the studio and used during production, representing an actual frame of animation that was photographed and appears in the cartoon. The overall measurements of the piece are 15.5" x 15.25" framed with the mat opening measuring 6.25" x 6" and the image itself measuring 2.25" x 3.25". The cel was originally prepared by the studio for sale at the Courvoisier Galleries and is in very good condition with some tape/adhesive residue around the edges of the setup. It features traditional characteristics of a Courvoisier setup, including the cel being trimmed to image and paired with a custom painted, airbrushed background.