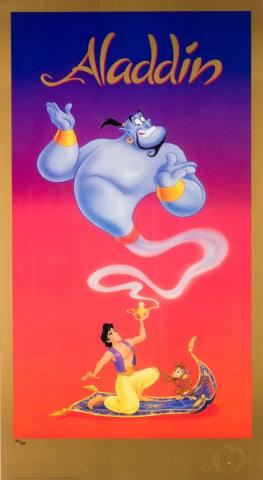 A limited edition poster from the Walt Disney Studios animated feature, Aladdin (1992). The poster was created after the film's release, exclusively for the cast and crew that worked on the film and features a great image with Abu, Aladdin, and the Genie. The image was created by Disney Studios artist Ron Dias and only 5000 were printed. Measuring 33"x18" overall with an image that measures 29"x16.25", the poster is in good condition with some surface wear visible in the seal and smudging and discoloration in the margins.