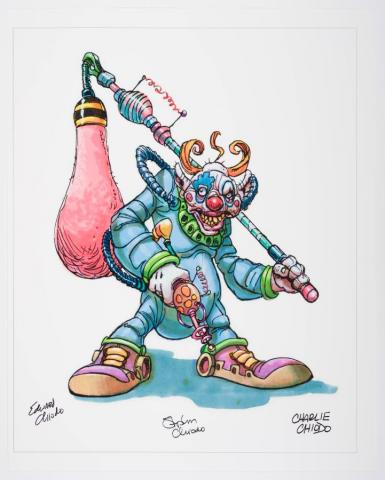 A signed print inspired by the 1988 cult classic film Killer Klowns from Outer Space. The film's creators, the Chiodo Bros., were special guests at the Van Eaton Galleries booth at San Diego Comic Con in 2006. For this special event, a small number of these prints were created and sold, and some were signed, as a commemorative collectible at the event. Featuring one of the clowns with a special surprise in his cotton candy sack, the image was created and authorized by the Chiodo Bros. specially for their Van Eaton Galleries appearance. The lower edge of the image is signed by director Stephen Chiodo, writer/creator Charles (Charlie) Chiodo, and writer/creator Edward Chiodo. Measuring 22"x18" overall, the print is in very good condition and will ship rolled.