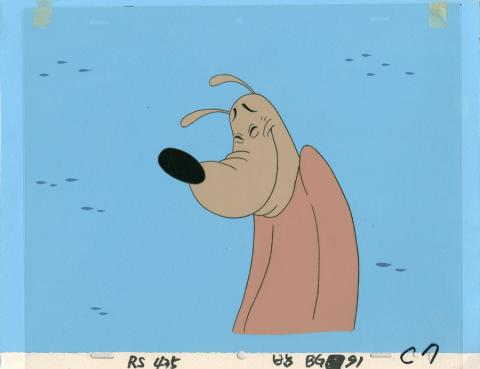 This is an original production cel and production background from the Nickelodeon Studios production The Ren and Stimpy Show (1991–1996). It is from episode 13 of season 5, "School Mates," and features Chuck, Ren's fraternity brother from obedience school. It was created at the studio and used during production, representing an actual frame of animation that was photographed and appears in the cartoon. The cel is paired with a hand-painted production background that is also from the series. The overall measurements of the piece are 10.5" x 13.5" for the background, 10.5" x 12.5" for the cel and 6.5" x 7.5" for the image itself. The production cel and background is in very good condition with some old tape on top edge.