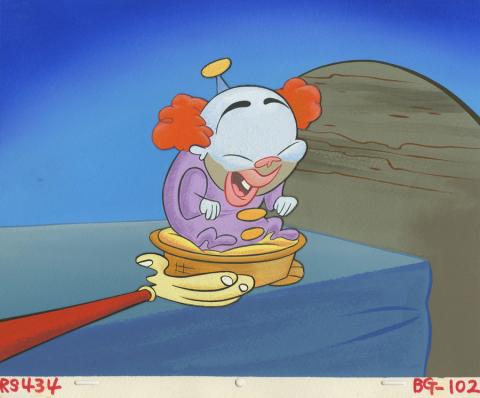 An original production background with background cel overlay from the Nickelodeon Studios animated television series The Ren and Stimpy Show (1991-1996). Featuring Sid the clown, the hand-painted background was created at the studio and used in the episode, "Stimpy's Pet" (1995). The piece is an actual frame of animation that was photographed and appears in the cartoon. Measuring 11"x13.75" overall and with an image area measuring 11"x13.75", the background is in fine condition, although it is missing the cel layer that contains the eyes. The style of Ren and Stimpy was revolutionary for its time with hyper-detailed, and sometimes disturbing, still background imagery as evidenced in this piece.