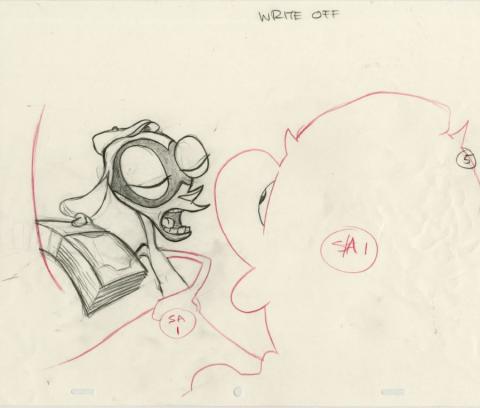 A production drawing from the SPUMCO Studios animated series Ren and Stimpy Adult Party Cartoon (2003-2004). Featuring Ren in a robbers mask holding a wad of cash and the back of Stimpy, the drawing was created at the studio and used during the animation process for the seventh episode of the first season, Altruists. After airing on Nickelodeon, Canadian animator John Kricfalusi worked with Spike TV to "revamp" The Ren & Stimpy show to be more vulgar and tawdry than the original cartoon, the network aired 3 episodes in 2003 before being removed from the network, with the remaining episodes being released on DVD. Measuring 10.5"x12.5" overall and with the character image measuring 7.5"x11", the production drawing is in very good condition with dimpling and wrinkling, especially on the right side.