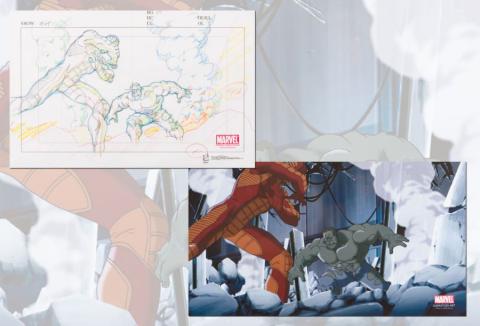 An original layout drawing from the Marvel Studios animated film Ultimate Avengers (2006). Featuring the Incredible Hulk fighting Giant Man, the drawing was created at the studio and used during the animation process. The drawing is accompanied by a giclee print depicting the finished scene that the layout drawing was used to create. Measuring 16"x36" framed with the mat openings measuring 8.5"x13.5" for the drawing and 8"x14" for the print, and with the hand-drawn image measuring 7.5"x12.5", the layout drawing and print are in fine condition as presented in the frame. The frame itself has some wear including scratches and dents.