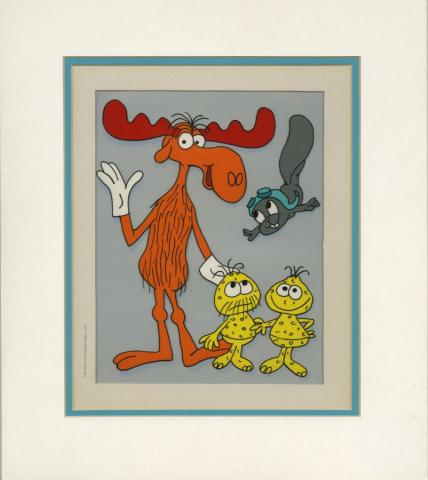 A rare scene cel inspired by the Jay Ward Studios cartoon series The Adventures of Rocky and Bullwinkle and Friends (1959-1964). Featuring Rocky, Bullwinkle, Gidney and Cloyd, the hand-painted cel was created at Jay Ward's personal store on Sunset Blvd. The cel was not used in production, but was made to order by Jay Ward and his wife, likely in the 70's based on the original mat and newer cels being dated. Measuring 10.5"x12.5" with the image itself measuring 7"x9", the cel is in very good condition, with minimal line wear and presented in its original mat from the Dudley Do-Right Emporium which closed April of 2005.