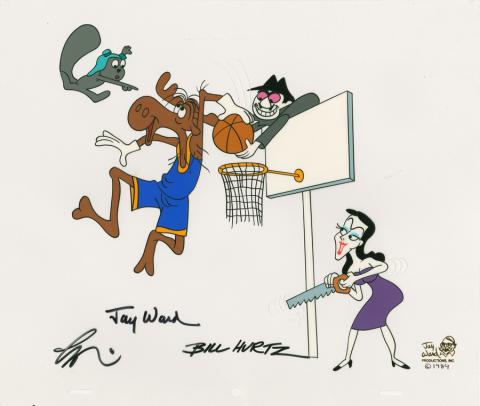 This is an original scene cel featuring imagery from the Jay Ward Studios cartoon Rocky and Bullwinkle (1959-present). This hand-painted scene cel features a great image of Rocky and Bullwinkle playing basketball while Boris and Natasha attempt to sabotage them. It was created at Jay Ward's personal store on Sunset Blvd. The cel was not used in production, but was created by Jay and his wife at their store on demand when a customer would place an order. The cel is signed by Bill Hurtz and Gerald Baldwin (two original directors of the show) along with Jay Ward. The overall measurements of the trimmed cel are 10.5" x 12.5" and the image itself measures 9" x 9". The cel is in very good condition.