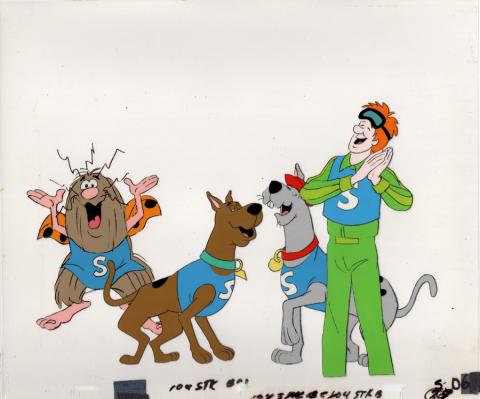 An original production cel from the Hanna Barbera Studios animated series Laff-A-Lympics (1977-1979). Featuring members of the Scooby Doobies including Captain Caveman, Scooby-Doo, Scooby-Dum, and Tinker, the three layer hand-painted cel setup was created at the studio and used during the animation process. The piece is an actual frame of animation that was photographed and appears in the cartoon as stock footage that would be used repeatedly. Measuring 10.5"x12.5" overall, and with the image area measuring 7.5"x10", the production cel is in good condition with minor line wear and some rippling in the cel of Scooby.