Laff-A-Lympics was a spoof of the Olympics and the ABC television series Battle of the Network Stars. It featured 45 Hanna-Barbera characters organized into three teams (the Scooby Doobies, the Yogi Yahooeys, and the Really Rottens), which would compete each week for gold, silver, and bronze medals. Unlike most cartoon series produced by Hanna-Barbera in the 1970s, Laff-A-Lympics did not contain a laugh track. 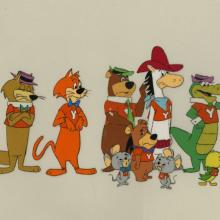