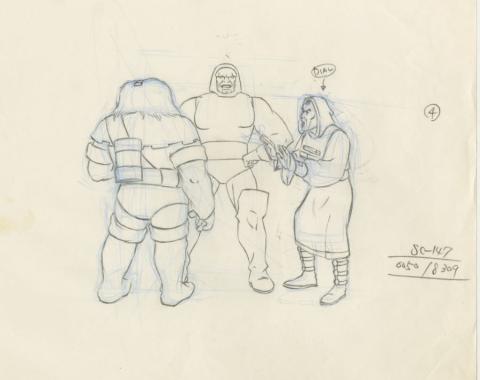 A collection of layout drawings and xerox storyboards from the Hanna Barbera Studios animated series Super Friends (1973-1986). Featuring various characters from the Super Friends but primarily Darkseid, DeSaad and Kalibak, the graphite drawings were created at the studio and used during the animation process of Season Eight Episode One titled: The Bride of Darkseid (1984). Included are a pair of working Xerox storyboards, stapled together, from the studio. Measuring 10.5"x12.5" overall, with an image size of 7"x8" at the largest for the layout drawings, and six images measuring 2.25"x2.5" each on the storyboard pages, the set is in very good condition with some edgewear and light handling wear, including the drawings being taped together.