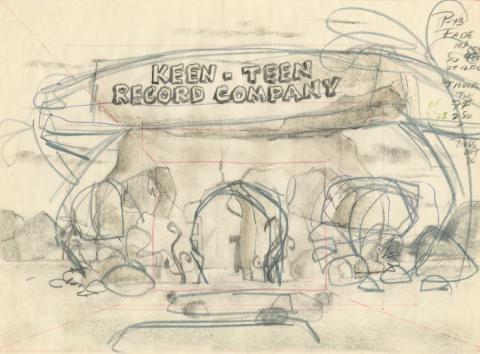 An original layout drawing from the Hanna Barbera Studios animated series The Flintstones (c.1960s). Featuring an exterior image of the Keen-Teen Record Company, the drawing was created at the studio and used during the animation of the 1961 episode "The Girls' Night Out." Measuring 10.5"x12.5" overall and with the image area measuring 8.5"x12", the layout drawing is in very good condition with light edge wear, including some tearing and creasing. The color image shown is a screen grab from the actual episode that is shown for reference, and is not a physical print included with the drawing.