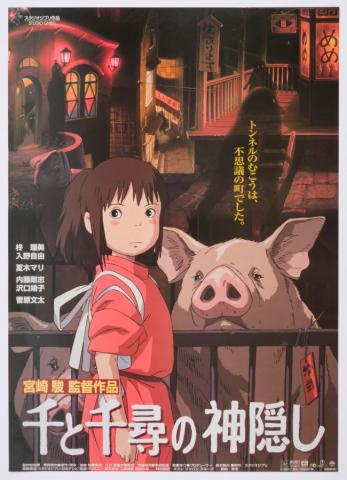 A promotional poster from the Ghibli Studios animated film Spirited Away (2001). The poster was created for the 2002 North American theatrical release, after Walt Disney Studios purchased the distribution rights for the area. One side of the poster is the traditional Japanese theatrical release imagery with Chihiro standing in front of her cursed parents. The reverse features a promotional image created by Walt Disney Studios with the film's festival accolades. Measuring 27"x19" overall, the poster is in very good condition with minimal edge wear and some dimpling throughout.