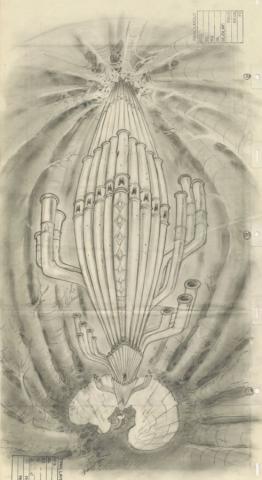 An original concept drawing from the Don Bluth Studios animated film Rock-A-Doodle (1992). The drawing features an extremely wide angle view showcasing the Grand Duke of Owls's pipe organ. It was created at the studio during the development of the film. Measuring 28.75"x13.5", and with an image area of 22"x13", the drawing is in very good condition with minimal edge wear and a horizontal fold from storage. The length of the page was created by taping another page to the bottom edge during creation at the studio.