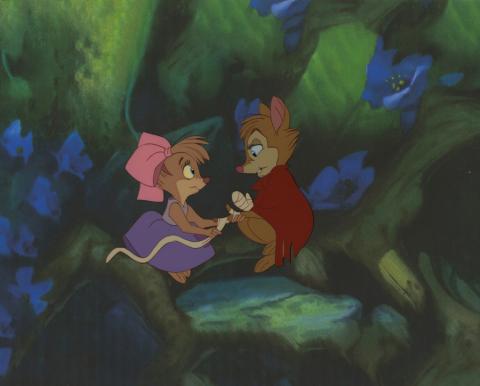 An original production cel from the Don Bluth Studios animated film The Secret of NIMH (1982). Featuring the touching moment as Teresa wraps her mothers hands, the cel was created at the studio and used during the animation process. The piece is an actual frame of animation that was photographed and appears in the cartoon. Measuring 10.5"x12.5" overall and with the character image measuring 4.75"x5.25", the hand-painted cel is in fine condition, and has been paired with a color copy reproduction background. The final image shown is a screen grab from this scene in the film and it is shown for reference only.