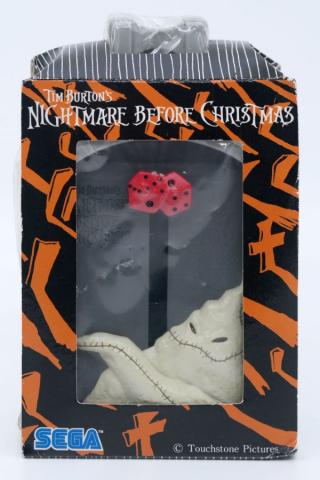 A plastic piggy bank inspired by the 1993 stop motion Walt Disney Studios feature The Nightmare Before Christmas. Featuring Oogie Boogie rolling his dice, the bank was made by SEGA for international distribution. The film's initial release was largely ignored by Disney due to uncertainty with how to market Tim Burton's vision. While the domestic market had a shortage of collectibles from the film, a variety of well designed and unique items were created overseas. Measuring approximately 4”x2”x6” tall, the bank is in very good condition with some minor wear to the packaging from age and display.