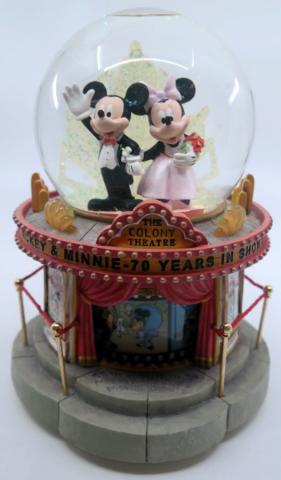 A snow globe form 1998 featuring Mickey Mouse and Minnie Mouse at the Colony Theatre. The base is fashioned after the brick walls of the theatre and is lined in tiny poster images of five of their films. Those posters include Steamboat Willie, The Nifty Nineties, Building a Building, Ye Olden Days, and The Wayward Canary. The snow globe also features a rotating film reel section, depicting scenes from those five films. The marquee of the theatre reads “Mickey & Minnie - 70 Years in Show Biz.” The base also features imagery of the handprints, footprints, and signatures of both Mickey and Minnie Mouse. The tune played is “The Anniversary Waltz.” The snow globe measures 6”x6.5” and 8.5” tall and is in very good condition with minimal wear from display.