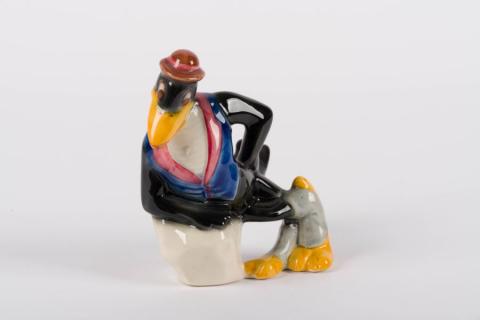 A ceramic figurine inspired by the 1941 Disney Studios film Dumbo. Featuring the film's clever side character Dandy Crow, the figurine was produced in 1941 by Vernon Kilns and measures 4.5”x3.5” and 5.5” tall. The piece is stamped with the number “39” on the underside and is in very good condition with minor production imperfections in the glaze. Dandy was originally referred to as Jim on many production materials, but his name was later adjusted with a nod to the term "Jim-Dandy" in order to avoid controversy with the name Jim Crow. The character's legacy is one of the most discussed, as the origin and creation is of direct inspiration from 1930s African American entertainers, but later analysis raises questions regarding the name, portrayal by a white voice actor, and the intended trope representation. These early ceramics from the time of the film's original release are hard to find and treasures to behold.