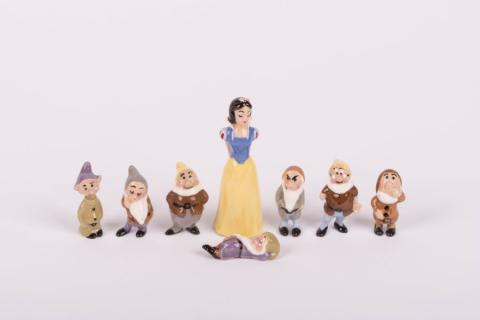 A set of eight ceramic figurines inspired by the 1937 Disney Studios film Snow White and the Seven Dwarfs. Featuring the eight titular characters, the set was designed by Martha Armstrong and produced by Hagen Renaker during the short period that they were licensed to produce Disney ceramics in the late 1950's. Snow White measures 0.75" wide x 2.25" tall, and the dwarfs measure 1.25" at the tallest and 1.25" at the widest. The set is in good condition overall with some crazing throughout, and visible wear on the Doc figurine. Despite the small stature of the figures, Hagen Renaker is revered for their ability to capture elegant details in miniature figures. The short time of production, and delicate nature of the miniatures has made these figures a treasure to find.