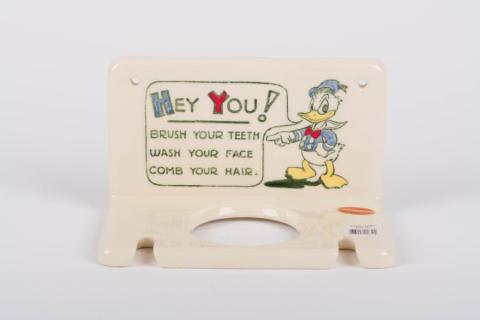 A Donald Duck glazed ceramic toothbrush holder produced by Evan K. Shaw Pottery in the 1950's. The back panel is designed with holes for wall mounting, and the base has two slots for toothbrushes and a large hole for a cup. The image features Donald Duck saying "Hey you! Brush your teeth, wash your face, comb your hair." Measuring 7”x4” and 4” tall, the toothbrush holder is in very good condition with minor wear from age, including crazing. Through the 1940s and 1950s, the Evan K. Shaw Pottery company and its sister companies, Metlox and American Pottery, produced a wide range of ceramics. In 1943, they were granted approval as a licensee to produce a range of Disney characters. These companies are no longer in business, and their highly desirable figurines are increasingly rare.