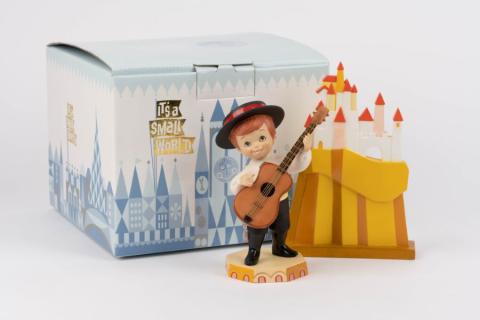 A Walt Disney Classic Collection Spain figurine themed for the It's a Small World Attraction at Disneyland Theme Park. Featuring a two figurine set, titled Hello Friends, the set was released in 2006 for the 40th anniversary of the attraction's addition to the Disneyland theme park. The set features a little musician boy playing his guitar that measures 4"x3.25" and 6" tall. He is accompanied by a backdrop of a village on the cliffs measuring 1.25"x5" and 7" tall. The set is in very fine condition with its original box, packaging, and COA. The COA was hand-signed by legendary Imagineer Rolly Crump.