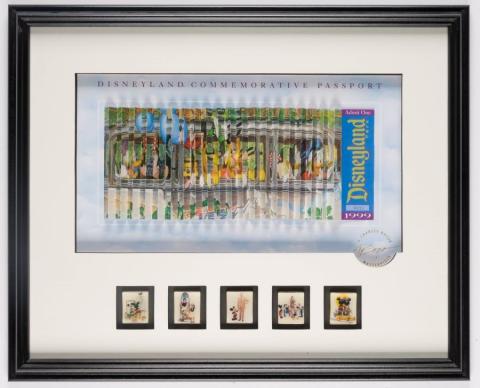 A limited edition commemorative Disneyland passport and pin set. Featuring Charles Boyer's painting "A Disneyland Outing" printed on an accordion-style passport that folds so it can be viewed from two angles, the passport is accompanied by a set of 5 faux pins. From the left, the passport is viewed as Mickey and friends are eagerly arriving at the park, and from the right, Mickey and friends are leaving the park after a full day of adventure. Created for the 45th Anniversary of Disneyland, the passport comes as it was originally framed with the pins, which depict some of Boyer's other memorable Disney masterpieces. Measuring 5"x12.5" within the 17.5"x21.5" frame, the passport is in fine condition. The frame itself has some scuffs and scratches from storage and the pins are in fair condition with the applied images exhibiting curling and peeling.