20,000 Leagues Under the Sea Disneyland Silk-Screened Attraction Poster - ID: may22647 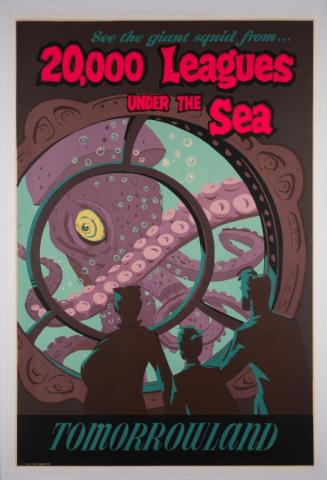 A hand silk-screened poster for the 20,000 Leagues Under the Sea attraction at Disneyland. Featuring the terrifying gaze of the giant squid through an antique porthole, the engaging and vivid artwork was designed by Disney artist Bjorn Aronson to advertise the 1950's Disneyland park exhibition. Including many sets from the movie of the same name, the exhibition was so popular that it remained in the park for 11 years until 1966 before moving on eventually to Disney's MGM studios in 1989. Due to the laborious process of silk-screen printing, the park printed multiples of this poster when it was designed, and as the park displayed poster would fade and wear, a replacement would be pulled from the printed inventory. The early silk-screened posters are some of the most identifiable and vivid representations of the early park. Measuring 54"x36", the attraction poster is in fine condition with minor wrinkling that has been smoothed out by linen backing for preservation. The poster is framed with a black square wood molding, not pictured.