20,000 Leagues Under the Sea is a 1954 American Technicolor film and the first science fiction film shot in CinemaScope, and is adapted from Jules Verne's 19th-century novel of the same name. The film was personally produced by Walt Disney through Walt Disney Productions It was also the first feature-length Disney film to be distributed by Buena Vista Distribution. 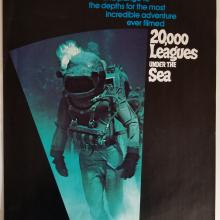