Andreas Deja is a character animator, most noted for his work at Walt Disney Animation Studios. He earned the distinction of being a Disney Legend in 2015. Deja's work includes serving as supervising animator on many characters in films during the Disney Renaissance. These characters include Gaston in Beauty and the Beast, Jafar in Aladdin, Scar in The Lion King, Lilo from Lilo and Stitch, Roger Rabbit in Who Framed Roger Rabbit, King Triton in The Little Mermaid, Mickey Mouse in Ruanaway Brain, The Prince and the Pauper, and Fantasia 2000, Hercules as an adult in Hercules, and many more. 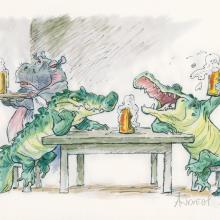