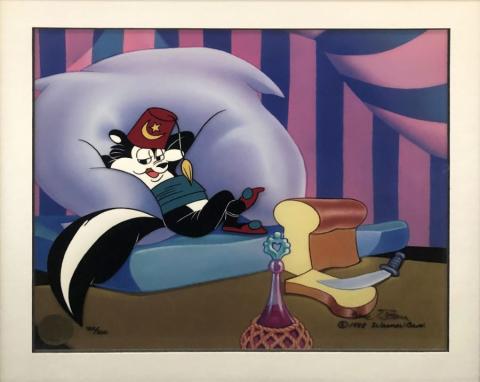 A hand painted limited edition cel from a series created by Warner Bros. Studios titled "Tribute to the Stars of Termite Terrace," which featured different Looney Tunes characters. This particular piece, released in 1998, features the now-infamous Pepe Le Pew relaxing in his own personal den, and is signed by legendary animator Chuck Jones. This limited edition cel was created in 2001 as part of a series paying tribute to the beloved characters which were brought to life by the Termite Terrace team, which was the small building Tex Avery and his animation team worked out of for about a year, including Chuck Jones and Bob Clampett. Measuring 19.25"x21.25" framed, with the character image area measuring 7"x6.5", the cel is in fine condition with minimal frame wear. The cel is paired with a color copy reproduction background for presentation purposes and is unexamined out of its frame.